On the 1st October Transport For Britain launched a campaign to promote potential cost savings and rail user benefits to the planned route for HS2. Full details of our proposals and associated benefits are detailed below.

We are looking to build as much support as possible so that improvements to the route can be presented to Government and HS2 Ltd before substantive construction work starts at the northern end of Phase 1. We have therefore developed a quick on-line survey in order to gauge the level of public support for our proposals. Please click here to complete the survey.

TFB is keen to see Lichfield and the surrounding area gain maximum benefit from its existing transport links and HS2 in future. This is particularly important since current HS2 plans bypass Lichfield altogether and may put at risk the existing fast trains to London.

There are two clear opportunities to improve connectivity which could offer significant economic and leisure benefits as well as cutting the overall HS2 budget by nearly 40%. The first is a minor revision to the HS2 Phase 1 route allowing for services to stop at Lichfield Trent Valley and integrate directly with the West Coast Main Line. The second makes use of the existing but underused line between Lichfield Trent Valley and Alrewas to integrate with the Cross Country route to Burton and Derby.

Our proposal, marked in red on the map, involves moving the planned junction between HS2 and the West Coast Main Line from 3 miles north of Lichfield at Handsacre (A) to just south of Lichfield Trent Valley station where HS2 crosses over the West Coast Main Line (B). The proposal also means that phase 1 could be completed at the point where it reaches Lichfield rather than continuing on to Crewe – delaying the unpopular A38 flyover. 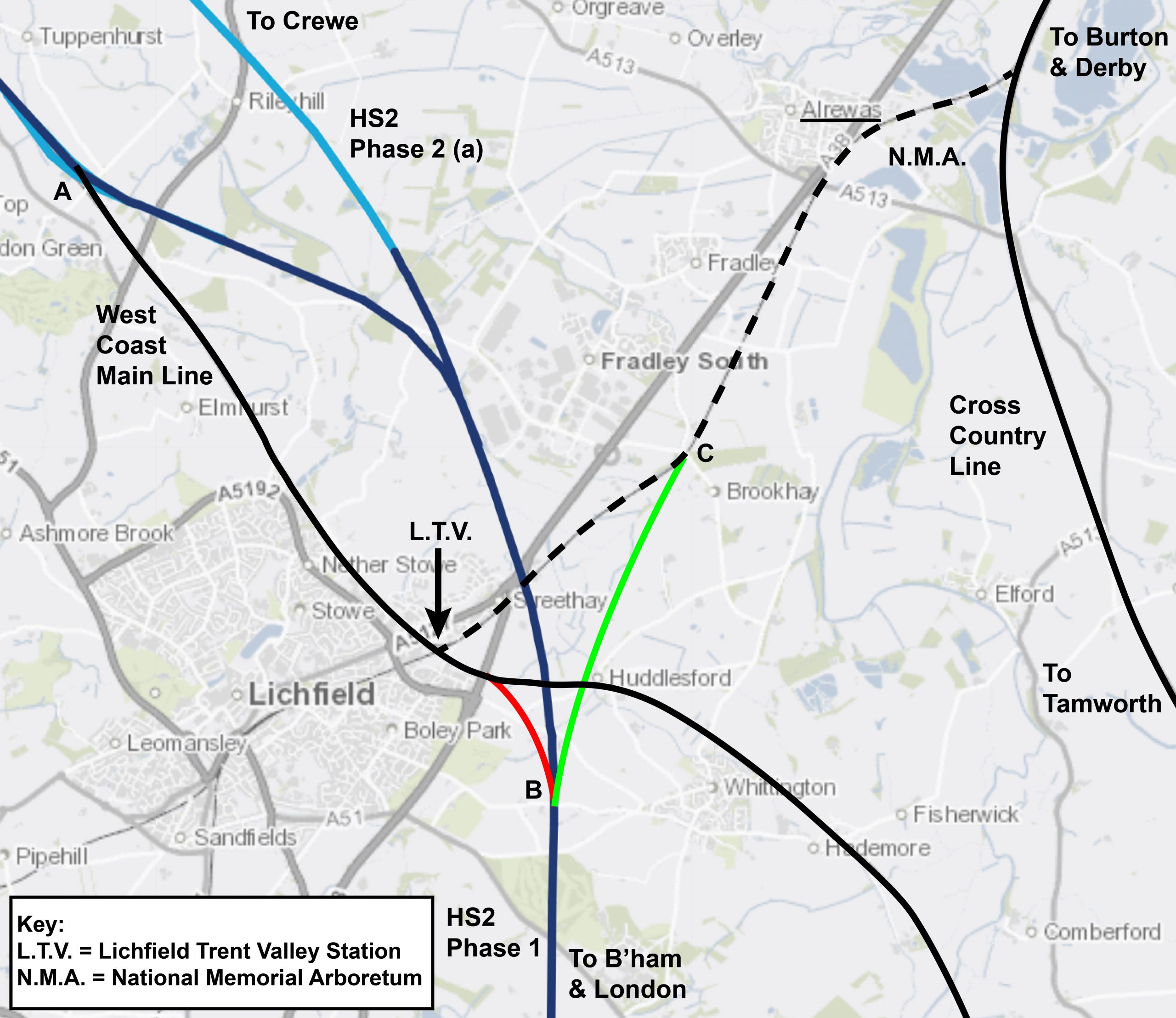 Transport for Britain believes that for a tiny fraction of HS2 costs it would make perfect sense to electrify Cross Country services and thus provide the additional benefit of speeding up a large part of the Cross Country network. Electrifying the route between Lichfield and Sheffield or Leeds could provide sufficient speed and operating efficiency gains to negate the need for HS2 Phase 2b to the North East – particularly if a short spur is added to link HS2 directly to the Burton / Derby line between points (B) and (C) marked in green. This will provide a better connected service maintaining city centre rather than parkway stations and thus integrating far better with existing public transport networks. Even without electrification, benefits would be felt immediately rather than waiting 7 -10 years for Phase 2b to be built.

These proposals could bring huge economic benefits from additional visitors, trade and house price growth, and while many people may feel it is too late to do anything about changing HS2 plans, this may not be the case. The National Infrastructure Commission (NIC) is currently conducting a review which includes options to drop Phase 2b – Eastern Arm – and replacing it with an extension of the Manchester HS3 North section to Leeds. This has already opened up an entirely new debate.

Y shape with the HS2 Eastern Arm replaced with an upgraded and electrified Cross Country route from Birmingham to Leeds. Lichfield could form the Apex of that route.

In spite of Covid, there is a strong justification to support better railway connections but at more affordable prices. Journey times of 45 mins from Lichfield to London and 7 minutes to B’ham Interchange or 15 mins to B’ham Curzon Street are fully achievable.

To support our proposal for an HS2 stop in Lichfield sign our petition https://transportforbritain.co.uk/petitions/#HS2StopLichfield.

Further information to support our proposals can be found by following these links:

The case for expanding the rail network https://bettertransport.org.uk/reopenings