TFB is keen to see Lichfield and the surrounding area gain maximum benefit from its existing transport links and would particularly like to see the restoration of passenger rail services between Lichfield, Alrewas and Burton on Trent. The restoration of the existing line which carries freight and the occasional cross country service would not only reopen passenger rail transport links to the East Midlands and beyond (lost following the 1960s Beeching cuts), but also provide regular services to the National Memorial Arboretum (NMA) which has annual visitor numbers in excess of 300,000 per annum and is poorly served by public transport links.

On the 1st October Transport For Britain launched the Arboretum Line project to reinstate passenger services from Lichfield to Burton on Trent via Alrewas with the publication of this survey. The survey was designed to gather the views of local people and the level of support for reopening the line.

The survey was constructed and delivered using google forms linked to the TFB and Arboretum Line websites. The survey was promoted alongside another TFB survey and petition (HS2Lichfield) via an advertorial in City Life Lichfield magazine (circulation circa 18,000) October edition and via the TFB Facebook and Twitter social media channels.

Survey responses within the scope of this report were gathered between 03/10/20 and 30/11/20. The survey remains live for further responses to be collected.

2. 96.5% of Respondents were overwhelmingly in favour of restoring passenger services from Lichfield to Alrewas.

3. For those respondents who were not sure / had concerns we asked why. There were 9 separate responses which varied considerably. However, several respondents would prefer to see passenger services restored between Lichfield and Burton and not just from Lichfield to Alrewas.

4. We then asked respondents if services were extended beyond Alrewas which additional stations they would like to reach and how often? Burton on Trent was the most popular destination for daily, weekly and monthly travel suggesting a rail service from Lichfield to Burton on Trent would be used for commuting, business and leisure purposes. The further the destination from Lichfield the less likely respondents would be to travel there on a frequent basis. Occasional and to a lesser extent monthly travel to Derby, Nottingham and Matlock scored highly suggesting these might be popular leisure destinations and that there may be sufficient demand to run regular services beyond Burton on Trent to these destinations.

6. We asked respondents if they has a choice of type of train which would they prefer to travel on. The majority of respondents first choice (59%) would prefer to travel on electric trains, followed by hydrogen powered trains (18%) and steam trains 13%. In overall terms electric and hydrogen powered trains were the most popular choice followed by steam and diesel. This reflects the growth in awareness and environmental and sustainability issues in relation to rail travel. Respondents suggested trains powered using bio-fuels might be considered and that steam powered trains might be best used to attract tourists. 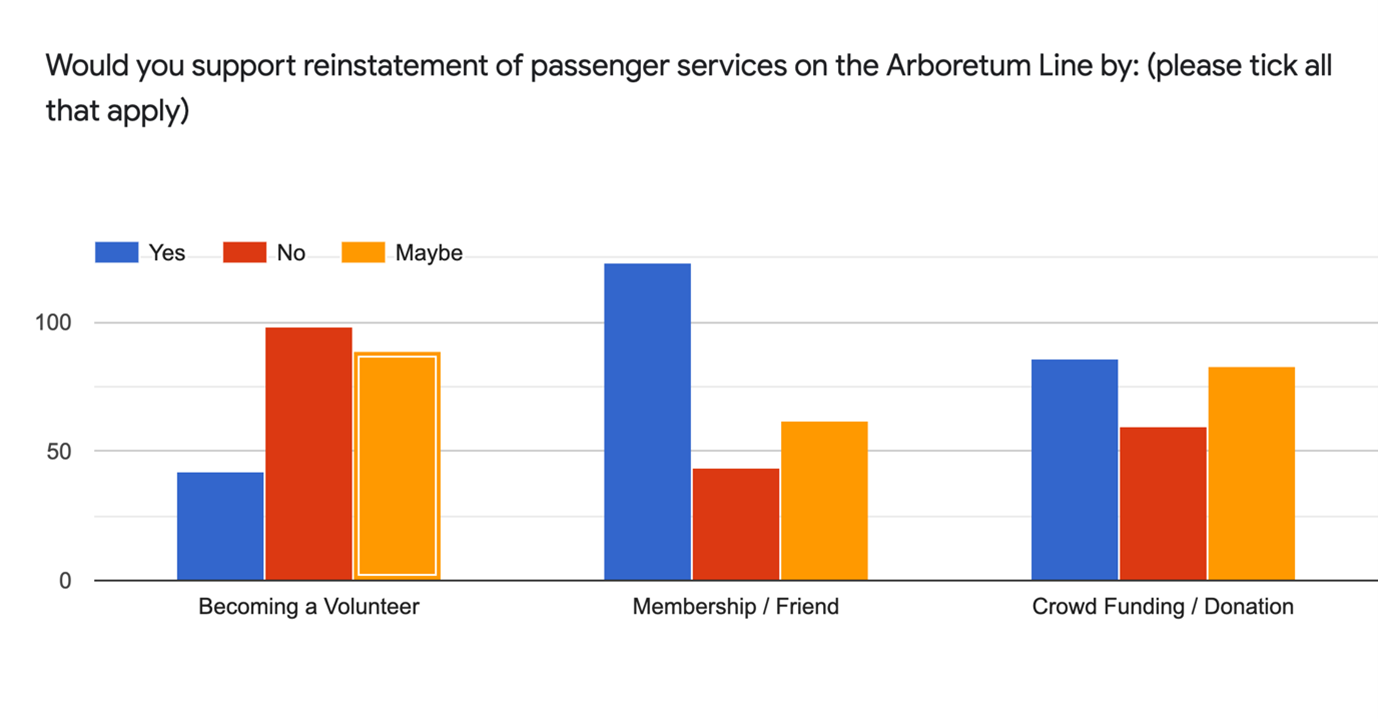 8. 86% of those completing the survey wish to receive regular project updates.

9. Finally we asked for any other comments. 44% of respondents responded to this question with a variety of responses. Again, these were generally positive with some interesting comments and useful suggestions in support of the project including: