Building for the Future

For almost a decade now plans have been underway to resolve the congestion issues driven by the lack of a link road between the M54 and M6 north. Current route options have created;

Consequently National Highways has identified this as an area for investment with a proposed new link road currently waiting for a Development Consent Order from the Secretary of State for Transport.

Transport for Britain strongly supports investment in a new link road and recognises the significant positive impact it will have on the surrounding communities. However, the major concern is that the current proposed design, with the inclusion of the existing roundabout as the end of the link road at the M6, will do very little to improve congestion. This will be further exacerbated by the lack of a motorway-to-motorway connection to the M6 Toll Road and a direct through route to the eastbound A5 / A460 facilitated by the new crossing over the M6 between Junction 11 and 12.

Option B West including link to the M6 Toll 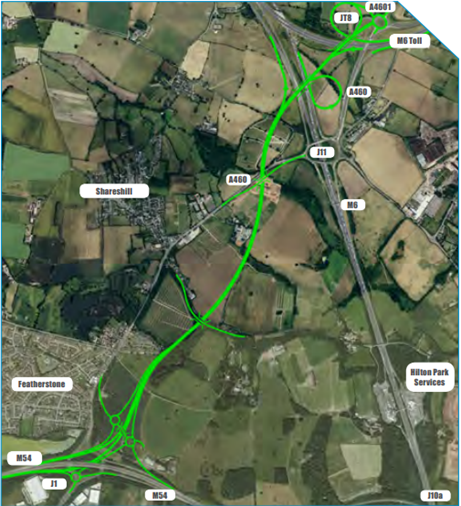 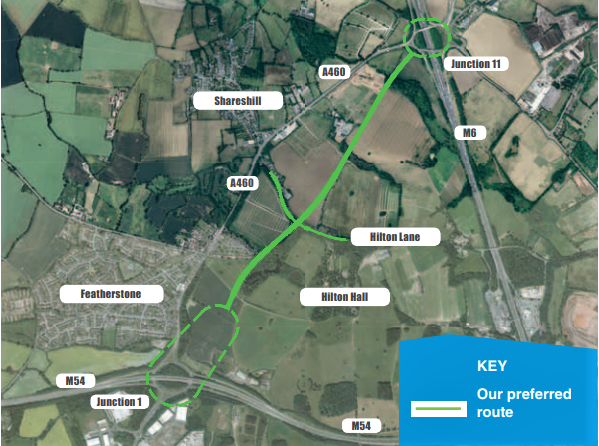 Option A from the 2017 Highways England Public Consultation

The preferred option (option B – see above) was submitted to the Secretary of State in January 2020. However, there are major concerns around the latest revisions to the design in which the project no longer connects directly to the M6 Toll. This will do little to ease congestion and causes the design to resemble the proposed Option A detailed in the 2017 Highways England Public Consultation. The original Option A was the least popular option with only 13% of the public’s support. 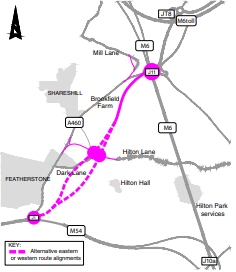 It has been confirmed by National Highways that the links to the east side of the M6, including the direct link to the M6 Toll, has been scrapped due to a lack of funding. Although there is acknowledgement that the proposed link road does not exclude providing a free-flow connection in the future, this does not explain why the approved design has returned to one that does not allow any improved connections at the eastern end and does little to solve the initial problem of congestion.

A 2017 report found Air pollution is linked with 40,000 early deaths a year, with road transport being responsible for 80% of Nitrogen Oxides within air pollution. Furthermore, congestion is estimated to cost in excess of £30.8 billion a year, averaging a single driver a yearly cost of £968.
“A Country in a Jam: tackling congestion in our towns and cities” Local Government Association 2017
Furthermore, the Secretary of State has raised environmental concerns and consequently has not yet given an order of consent on the project. Specifically, how the project would comply with the sixth carbon budget in the Carbon Budget Order 2021. Transport for Britain’s concern is that the full impact of the congestion, and consequential carbon contribution, caused by a roundabout rather than a free-flowing link over the M6 to the M6 Toll and A5 has not been considered. This specifically has severe consequences for carbon emissions and a negative impact on air pollution in the local area.

In a world where environmental sustainability should be a crucial driver behind every infrastructure project design, this project is lacking any consideration of the impact of the terminus of the link road as a roundabout at Junction 11 on the M6.

Transport for Britain strives to challenge the current design due to both economic and environmental concerns. Specifically, the huge missed opportunity to create a free flow through route over the M6 to the M6 Toll, shortening journey times for those travelling on the M54, M6 and the A5, as well as easing congestion and improving the air pollution in the area.

Have your say here by filling in our survey.